What is the proportion of women in the Observable community?

Browsing at Observable’s notebooks, I’ve noted that the vast majority of notebook’s authors are males.

To confirm my intuition, I’ve looked at all 120 trending notebooks the 5th of May 2022. I’ve been just counting with my fingers but I came to the following results : 59 men versus 7 women among all the authors of trending notebooks. This should be confirmed with more systematic and rigorous analysis but this is not much (about 10%).

Of course, gender bias in programming is a well known and documented topic but I think that diversity in a community is a very important value. Do you have more documentation on this topic? Is it something important for Observable to have a diverse community? Are you planning any action on this topic?

Thank you for raising this issue. I also wonder if it’s a question that can be answered? I don’t know that Observable has any means of collecting sex/gender identification data from users. Also, there are plenty of folks that don’t use binary gender identifiers.

Notably, Observable is committed to equality: 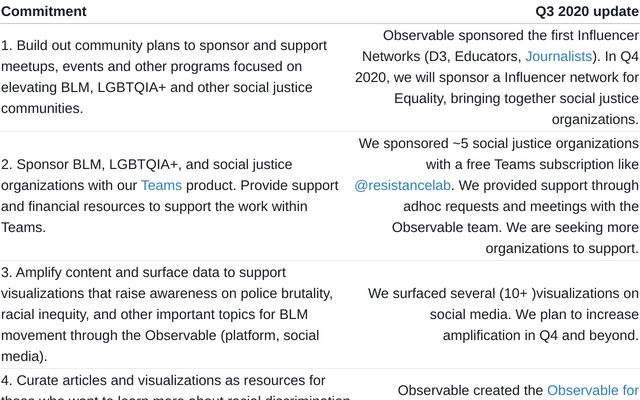 Accountability We hold ourselves accountable for our commitments. That means continued self-assessment and learning about how we can help and positively impact the BLM, LGBTQIA+ and other communities and the world. We re-evaluate these commitments...

And the team keeps records of gender distribution within the company: 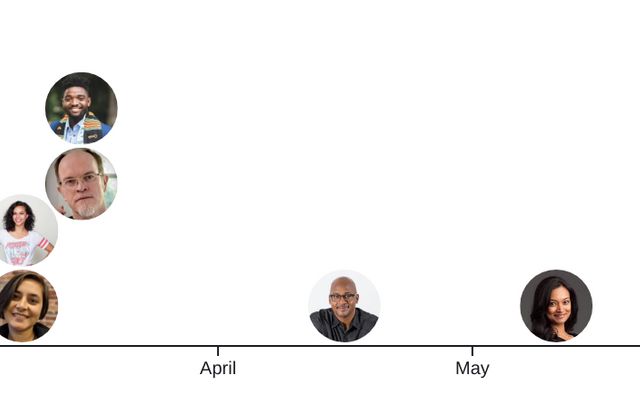 Building a Company in 2020 About Me I care deeply about how technology helps humans learn, connect, create and make better decisions. In 25+ years in tech, I've gone from developer, technical lead, engineering manager, then VP of Engineering. I went...

… it’s not a perfect balance, but it’s looking pretty good for a gender perspective!

Thanks a lot for your answer. It’s great to have follow your action plan for equality each quarter and the story of Melody Meckfessel is very inspiring.

Of course, gender bias in programming is a well known and documented topic but I think that diversity in a community is a very important value.

How do you define ‘gender bias’ in the context of a completely free platform like Observable that has absolutely no barriers for entry? There are no guardians that could stop or hinder women to engage with this community so I am curious what party you think could be ‘biased’ here?

Of course, Observable is open to everyone. However, it’s worth to understand why there is such a big gender gap in participation. We have the same issue in wikipedia. It’s fully open but women don’t contribute as much as men and feel excluded : Gender bias on Wikipedia - Wikipedia

How can a woman feel excluded when there are no observable thresholds?

I understand and support fighting any discrimination. However, in this case (and Wikipedia) it seems condescending to push women to enter a field they are already free to enter at any time? Where they are actually quite welcome!

But why is this an issue in the first place? I’ve just been taken care of my mother in the Netherlands and interacted a lot with the health care system. This health care system is run almost exclusively by females; nobody seems to think this is a problem?

I don’t think Wikipedia is a good comparison because there are frequent arguments there about what to include in the encyclopedia. There are notorious “edit wars.” A common debate is between inclusion and deletionism, such as arguments over who is famous enough to deserve a wiki page. There are projects to include more women’s history, and they do get some resistance.

Observable itself doesn’t have these issues because anyone can create a notebook and nobody will tell you whether it’s “worthy” or not. (Perhaps someday people will push the limits on what can be published in an Observable notebook, but I don’t think it’s happened yet?)

In the Observable forum, it would certainly be possible to make some people feel unwelcome, as can happen in any online forum. Only good moderation and the goodwill of the community will prevent that.

But I don’t think there is enough activity yet for it to be a big problem? Things seem pretty quiet.

Of course, Observable is different from Wikipedia. We’re not creating a encyclopedia. It’s just a platform to explore your data.

Do you know any communities with a substantial proportion of female participants that would be interested in making code notebooks? If so, go proselytize! If they are hesitant to try, ask them about what they’re missing / what might convince them.

If you (anyone reading this) are a woman, where did you hear about Observable and what made you want to try it? Did you dive right in or were you initially hesitant?

My impression is that most tech and programming focused online communities skew heavily male (Github, stack overflow, open-source-project mailing lists, IRC channels, hacker news, technical reddit communities, etc…), even those which try (from what I can tell anyhow) to be welcoming and friendly to everyone. More generally, software as a career field (and other jobs heavily involving programming) skews heavily male.

Best way to work on this is probably to find some people who would enjoy the community / enjoy the work, and invite them to join. For instance, get students making notebooks.

Have you found some female notebook authors who did work you enjoyed? Like their notebooks, subscribe to their RSS feed, link their work in your social media, try building on their work, strike up a public conversation about it, …

The Observable company seems to be trying to recruit more diverse notebook authors, e.g. by running women in dataviz events like March is Women's History Month! / Observable / Observable but from what I can tell most members of the community found their own way here rather than being explicitly recruited, so there’s probably a limit to the ultimate effects of corporate outreach.