I’m playing around with an idea and was hoping to get protobufjs working in Observable. Unfortunately I’m a bit of a newbie to javascript. The language isn’t hard to work with but trying to understand the tooling side of things is… an adventure.

I can find protobufjs on unpkg, they claim to be AMD/CommonJS compatible (https://github.com/dcodeIO/ProtoBuf.js/#installation) but I haven’t been able to produce a working require statement that didn’t produce an “Invalid module” error. Can anyone help me figure out if I’m doing something wrong or is protobufjs just unconventional in some way that makes it incompatible at the moment?

Sure, that one’s a little tricky - here’s what works:

This uses wzrd.in to build a bundle of protobufjs and its one dependency, long.

For the interested, why this module is tricky to require:

We’re continuing to work through issues like this - whether it’s recommending that libraries add unpkg entry points (which would fix the issue in this case, if long had one), or figuring out how to make require() smarter so it can properly find the entry points of sub-requires.

I may have a similar issue with function-plot

EDIT: I just saw Tom’s notebook https://beta.observablehq.com/@tmcw/requiring-modules-troubleshooting , but still can’t make it work. Thanks in advance!

Sure, so - as function-plot notes in its readme, it relies on d3 v3, just sort of ‘laying around’ in the window variable. So, you can implement this like so:

That’ll properly get functionPlot working in your notebook.

It’s embarrassing: I thought it’d just return the graph like Vega, but I got an Object type response and I don’t know what to do with it. If it’s easier for you to see an example: 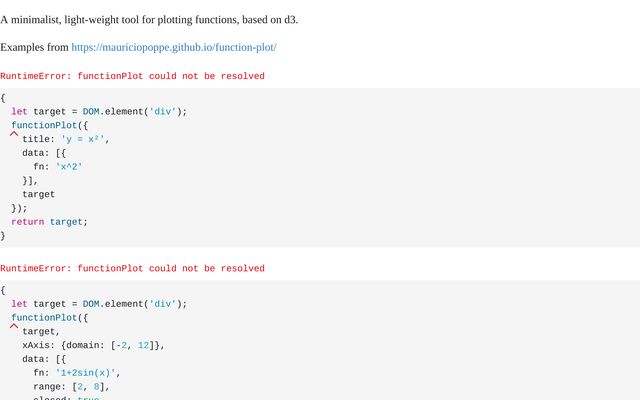 An Observable notebook by Yao Liu.

functionPlot takes an element target as an option - to get it working, you can do

Thank you SO MUCH!!!