I’m trying to get the hang of dynamic objects in a graph. Here’s an example I put together with circles that can be dragged only horizontally, not vertically: 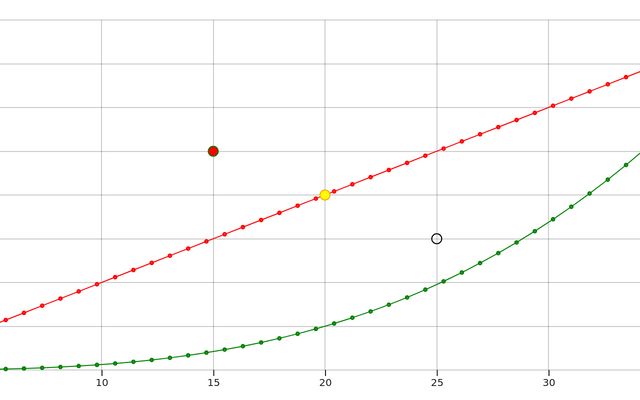 An Observable notebook by Jason Sachs.

The answer to your first point is pointer-events="all".

For the second point, I would read these two tutorials representing the two main approaches (views and mutables):

Thanks! What’s the recommended way of putting short css snippets into a notebook?

It looks like mutable is the way to go in my case, since the handles are just one aspect of my graph, not the primary output of it.

Does it work with properties?

Hmm. It looks like the mutable name has to be a global variable, you can’t do something like this?

(The need for parens is explained in the Introduction to Code notebook.)

You can modify a property of a mutable value, but it won’t trigger reactive evaluation until you reassign to the mutable itself. So you might see code like this:

I’m still stymied by the need for mutable to act on a name rather than a value (I think).

I plan on having the same drag handler operating on several different data fields, so something like

If you don’t mind triggering re-evaluation for all the handles simultaneously, you can have a mutable handles which is an array, and reassign to that whenever you move any handle:

If you want to keep your mutables separate, it’s a bit trickier because there’s currently no way to write code that sets the value of a generic mutable (a reference to a mutable) and triggers re-evaluation. You have to write separate get & set functions for each mutable, as here:

You can, however, treat views generically: