A bit confused about 'mutable', etc

Can someone help me figure out the right way to make a little interactive plot which takes the moved positions of Bezier curve control points, and propagates those changes back to a cell where they are first defined? (I want to do similar interfaces which are more complicated … just trying to get something simple working first.) I have this notebook https://beta.observablehq.com/@jrus/bezier-segment and I’ve been fiddling around with it, but I feel like I don’t really yet understand how ‘mutable’, ‘viewof’, etc. are supposed to work, and the documentation notebooks about it aren’t really giving me a conceptual understanding. I can copy/paste their examples and those work, but I don’t really get what is going on. (Maybe those can also be extended with a bit more technical description at the bottom? Or maybe I’m just missing something / not reading the right bit in the right way.)

3 Likes
Should the "viewof" keyword be renamed?
how to use `mutable` to escape cell re-evaluation for input?
Scoping problems (probably a Newbie error)
Read numbers and characters from the keyboard
kelleyvanevert May 6, 2018, 12:26pm #2

You’re code is almost spot-on, and the bez value does indeed update when you drag the handles. The only problem you had in your code, is that when your display cell (the one track turns bez into a string format) references by mutable bez instead of just bez, and hence it’s not updated when bez is updated. That is, the only edit required is changing the following:

To understand: there are 2 ways of referencing mutable cells

Now, to understand what’s going on…

Thinking mutables away for a second, what Observable does under the hood, is track dependencies between cells. If some cell a references another cell b, which Observable knows by just statically analyzing it’s code (as far as I know), then Observable notes this dependency, and every time b is updated, it re-evaluates a as well.

Sometimes you want to organize your notebook in such a way that you can just update your cell-defined variables, as if they were ‘normal javascript variables’, i.e. what you’re doing with bez. But, by referencing such a variable (necessary in your plot code for the assignment), as stated above, Observable notes a dependency of plot on bez, and hence, plot would be re-evaluated when bez changes. This is not what you want.

Hence, Observable introduces the mutable keyword. Now, you can define a cell variable to be mutable, i.e. with your mutable bez = [ ... ], and there are 2 (!) ways to referencing this cell:

How mutable and viewof relate

The explanation above, and in particular the two distinct ways of referencing a mutable cell, are enough to use mutables correctly. If you want to understand how this exactly ties together with the viewof operator, though, we have to go a bit ‘deeper’ into implementation details.

When you define a cell with the code, say, viewof a = html`<input />`, what Observable ‘actually does’ is create two separate cells, which you can think of as follows:

If this sounds familiar now, it is, because mutables are in a way just syntactic sugar for using viewof. (See my initial attempt to create something like mutable using just viewof: https://beta.observablehq.com/@kelleyvanevert/settable-variables/2 .)

When you define a cell with mutable a = ...b..., what Observable ‘actually does’ is create two separate cells, which you can thinkg of as follows:

The two ways of referencing a (as explained above, a and mutable a) then translate to:

Obviously, this can be done in a single cell using viewof: the ‘mutable interface for a’ is just the viewof a.

I hope this explains!

Thanks for the explanation, @kelleyvanevert! To partly reiterate, I want to show how both viewof and mutable can be implemented without special syntax—both operators are syntactic sugar.

Equivalent implementation without the viewof operator:

Any reference to viewof foo in other cells is equivalent to viewof_foo. To implement view references without special syntax, instead of:

Equivalent implementation without the mutable operator:

(You could simplify slightly by inlining the initial value of foo in the mutable_foo definition, but this is the pedantic equivalent implementation that also works if the initial value is a promise or a generator.)

Any reference to mutable foo in other cells is equivalent to mutable_foo.value. To mutate the mutable value without special syntax, instead of:

Likewise, to non-reactively reference the value of foo, instead of: 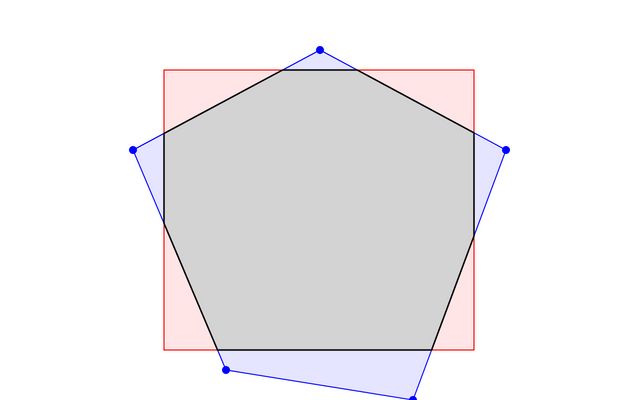 Views are easiest when there is a primary interface to the interactive value. If you want multiple synchronized views, where each display controls a shared underlying value, then you need to designate a primary cell to define the value. That cell can be visual if you want, but it probably makes more sense to have it as a data cell, and then have all the views modify the data. Here’s a notebook on that: 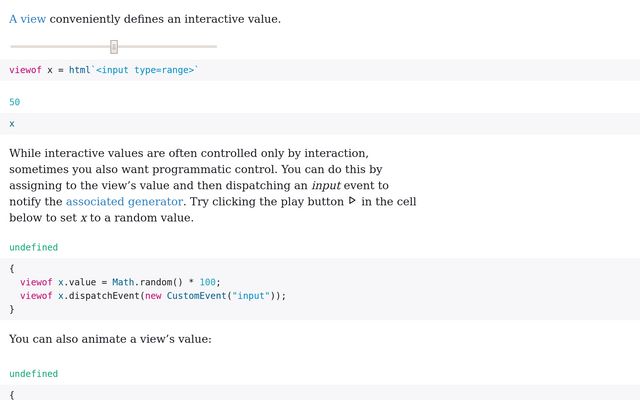 Mutables are intended to represent shared state that can be mutated by any cell in your notebook. Mutables work best when each cell either gets (reads) or sets (writes) the mutable value, or neither, but not both. You can have multiple cells setting the mutable by assigning to mutable foo, and multiple cells getting the mutable with reactive references to foo, but you don’t want to reference foo in the same cell that you assign to mutable foo because it might loop infinitely.

If you use a mutable to represent the control points in your notebook on Bézier segments, the challenge is that the interactive displays need to both read and write the values of the control points. (If one display modifies the control points, you want to update all the displays.) You could probably achieve this if you used the this value to prevent the views from being reinitialized when the control points change, but I’m not sure that would be simpler than using views plus event listeners, and it would certainly be more complicated than having a primary view.

Thanks, both of you. I’ll keep fiddling with it for a while.

hence, plot would be re-evaluated when bez changes. This is not what you want.

So, I do want the plot to re-render when bez changes. I’m not sure if that necessarily means the whole cell should be reevaluated, or just the redraw function should be triggered, but eventually I would like to be able to have several plot cells in a row (showing different things) but with the controls linked so that changing any one of them updates the data and then triggers them all to redraw.

Short note: You can update your plot in two ways: (1) by simply re-evaluating the cell (and then you don’t need the code that does the d3 update), (2) by using code that does a d3 update, as you currently do. The funky thing in this situation, is that your plot displaying cell also functions as an input cell, and hence you can’t choose option (1) because then the moment you start dragging, the cell would re-evaluate.

There are several things to say on the matter of tying cells together into an interactive notebook:

You might want to add a bit more text description to https://beta.observablehq.com/@mbostock/standard-library or GitHub - observablehq/stdlib: The Observable standard library. (in that one, Generators.observe and Generators.input are each described as “…”). As it is now the the code itself as the main documentation, and it takes decent understanding of JavaScript promises to follow.

[Also, for the purpose of more targeted links (e.g. would be nice here to directly link to the generators section of the standard library notebook), can you folks consider explicitly naming all of the cells with section titles in the first-party documentation notebooks?]

@jrus Oops! That had been on my to-do list for a while, but thanks to your encouragement I’ve finally updated the API reference. Hope this helps.

Here’s a new notebook that demonstrates how to implement synchronized interactive views: 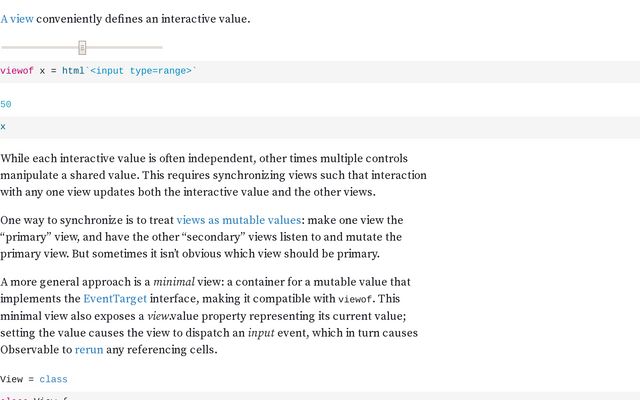 It expands on the Views are Mutable Values notebook, but with a custom SVG display rather than using HTML input elements.

Thanks Mike, this one looks like a winner. I’ll try it whenever my 21-month-old gets to sleep and I can spend some more time fiddling.

Then I’ll also go back and more carefully read the other replies in this thread.

Hmm, somehow I got my notebook (with various unpublished changes) into a state where it hangs the interface before I can edit it to change/fix anything.

Any advice about dealing with that? Maybe there could be a way to load a notebook in such a way that all of the cell editing works but nothing gets evaluated/rendered?

Safe mode: What to do when accidentally added a non-terminating while loop?

Yep, just found that one (before going to eat). Thanks!

where bez is an instance of View from @mbostock/synchronized-views

I currently have those lines commented out at https://beta.observablehq.com/@jrus/bezier-segment

Okay, I figured out my problem, which was that I was calling update still inside the dragged callback and then running viewof bez.value = viewof bez.value; inside of update(), but then that was recursively triggering update again with the event listener. Newly published version should nominally work.

Mutables work best when each cell either gets (reads) or sets (writes) the mutable value, or neither, but not both.

In Martien’s Timer I do use both gets and sets of the boolean running in the same cell. I’ve run both in the re-evaluate and the infinite loop pitfall.

I literally signed up for this forum just for an explanation like this and those below by @mbostock. Thank you so much, both of you!