I’m new to Observable and would like to use it to make embedded interactive explanations for my blog.

Question: Are the above scenarios possible in Observable, and if so, are there related libraries and/or examples I should look at?

Your first use case is certainly possible; my instinct would be to try to use the d3 library to achieve what you want (but maybe that’s just because I’ve been learning that recently…). It’s a bit hard to say more without knowing exactly what you want, but you may want to look at some of the “featured collections” on this site for inspiration https://beta.observablehq.com/@observablehq?tab=collections.

The second one should also be possible via the use of the chess.js and chessboard.js libraries. Just for you, I put together a demonstration notebook (the highlight example at the end may be most relevant): 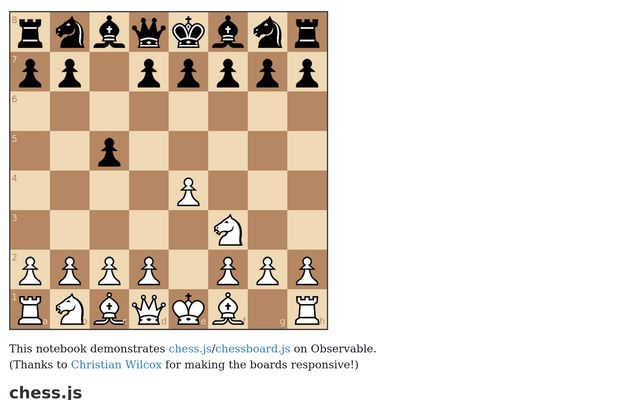 Hi Bryan, thanks for putting together the chess notebook.

I forked it and added responsive layout to the boards: https://beta.observablehq.com/@cw/hello-chess

Feel free to merge it into yours and I’ll delete the fork.

Thanks for the credit, Bryan. I noticed the fork brought over an extra blank max-width attribute. Seems like chrome canary on my phone has some input quirks. Makes edits a bit tricky but not having to be attached to a desktop is fantastic!

Thanks Christian! I think I’ve corrected the extra attribute just now too. Feel free to let me know if you see anything else.

@bgchen — This is great stuff.

It makes me want to combine it with your previous notebook loading data from a Google Sheet — to make some sort of format where you can easily write a spreadsheet to generate a notebook with nicely-formatted, blow-by-blow commentary for a given chess game…

Thanks so much guys! This is a wonderful starting point for me!