cell marked detached: why? What does it mean?

In the following notebook I get a cell marked <detached>
https://observablehq.com/d/53f57fbb8e2305ae 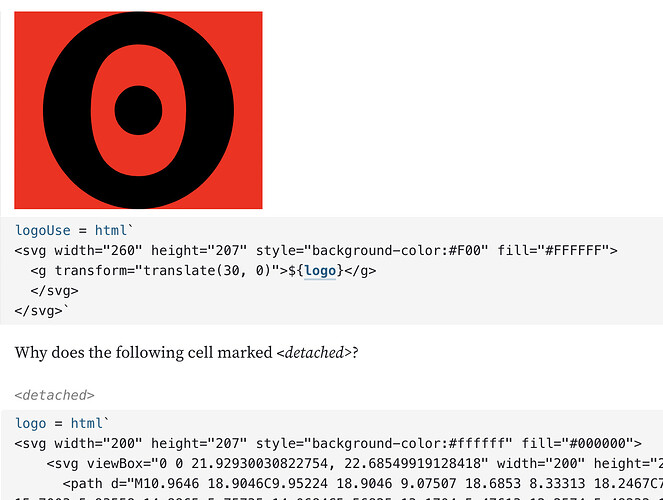 What does it mean? Why is it? 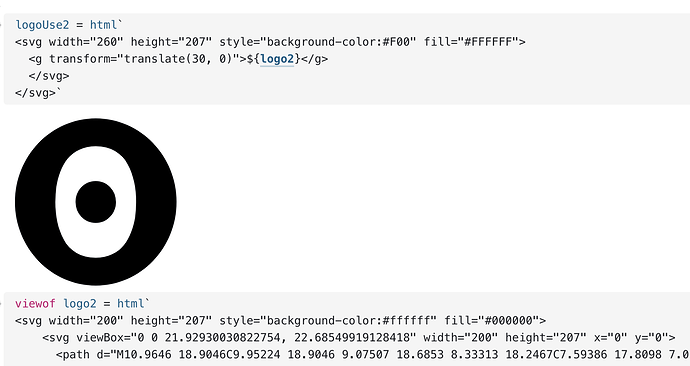 In the following notebook I get a cell marked <detached> …
What does it mean?

An HTML element can only appear once in the page. In the context of Observable’s reactive runtime, when the output of a cell is referred to elsewhere, only one can appear. Thus Observable generates a placeholder element that says <detached>. if you’d like multiple copies of the same HTML element, you can always clone it. Thus, in your logouse cell, you might have ${logo.cloneNode(true)}, rather than just ${logo}.

The reason an element can only appear once is due to the internal representation of the webpage called the DOM, which has a tree structure by design. One characteristic of a tree is that each node has only one parent. The consequence is you can’t place it in two spots at the same time. This is a general HTML/Javascript issue and not at all unique to Observable. I do think you see it arise here more often due to the reactive environment and attempts to reuse output as you have done.

Thanks for the explanation about <detached>.

So you do not see the spinning circle for the cell logoUse2 in the notebook, don’t you?
I am using Brave but I see it also in Safari.

Here is a screenshot:

It continuously circle and nothing is shown…

So you do not see the spinning circle for the cell logoUse2 in the notebook, don’t you?

Hmm… I do see it now; not sure how I missed it.

I suppose that your logoUse2 cell is waiting for logo2 to have a value before it resolves. But logo2 doesn’t have a value since viewof logo2 has no value property.